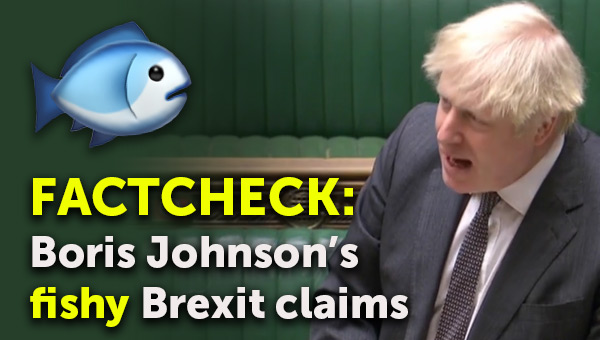 Today, the House of Commons is debating the European Union (Future Relationship) Bill. The Bill is 85 pages long, was published less than 24 hours ago, and aims to implement the 1246-page deal agreed with the EU just days ago into UK law.

Despite the huge complexity of this, the Government is giving MPs just 5 hours to debate and vote on this hugely important piece of legislation.

Why exactly does the British Government want to push this deal through without a chance for proper scrutiny? Well, my exchange with the Prime Minister earlier today shows exactly how quickly the hollow promises made by the Tories fall apart.

In response to my question, the Prime Minister suggested that in five-and-a-half years, British fishermen might be able to have exclusive access to UK waters. That’s a very bold claim, but is it true?

The trade deal agrees to a transitional period until 2026. The fishing industry has reacted angrily because this does not live up to what was promised.

But is the Prime Minister correct in suggesting that after this period, UK fishermen will ‘take back control’? In short, no. The EU-UK deal is incredibly complex and, as you would imagine, contains a lot of detail on how fisheries and access to waters will be handled moving forward. The Prime Minister’s answer to me, as expected, ignored all of this.

After the transition period, the deal includes provision for access to UK waters to be granted subject to the terms agreed in annual negotiations. There is a very clear condition in the deal which guarantees that the UK cannot treat the EU unfairly in this process.

3. The Parties shall conduct the annual consultations, including on the level and conditions of access referred to in paragraph 1 of this Article, in good faith and with the objective of ensuring a mutually satisfactory balance between the interests of both Parties.

Page 266 of the trade agreement

The deal also clearly states what the outcome of these negotiations should be: that they should “normally result in” access to fish “at a level that is reasonably commensurate” with what they had previously.

4. In particular, the outcome of the consultations should normally result in each Party granting:

Page 266 of the trade agreement

So, the Prime Minister’s claim that UK fishermen will have total control over waters and stocks is looking rather fishy.

What would happen if the UK refused access to waters?

The comprehensive deal predictably makes provisions for this in a section entitled “Compensatory measures in case of withdrawal or reduction of access”:

1. Following a notification by a Party (“host Party”) under Article FISH.8(5)[Access to waters], the other Party (“fishing Party”) may take compensatory measures commensurate to the economic and societal impact of the change in the level and conditions of access to waters. Such impact shall be measured on the basis of reliable evidence and not merely on conjecture and remote possibility. Giving priority to those compensatory measures which will least disturb the functioning of this Agreement, the fishing Party may suspend, in whole or in part, access to its waters and the preferential tariff treatment granted to fishery products under Article GOODS.5[Prohibition and customs duties].

Page 267 of the trade agreement

It is reasonable to suggest that if the UK were to “take back control” of its waters and for UK fishermen to “fish every single fish” after the transitional period, that the EU would seek to apply the hardest compensatory measures possible.

What good would total control of our waters be if the fishing industry in the UK were to completely lose access to its biggest market - the EU - as a result?

The Prime Minister is making totally nonsense claims and in turn, making a mockery of the Scottish fishing industry.

What does the fishing industry think of the deal?

"What we have got now is a fraction of what we were promised through Brexit. We are going to really, really struggle this year.”
Andrew Locker - Chair of the National Federation of Fishermen’s Organisations

“Yes, the UK fleet has reciprocal access to EU waters, but they are far more reliant on our waters than we are on theirs – EU vessels fish six times more in UK waters than we fish in theirs… The adjustments to UK shares of fish are modest at best, and in some cases will leave us with some very real practical fisheries management problems.”
Elspeth Macdonald - Chief Executive of the Scottish Fishermen’s Federation

“Setting politics aside, the members of SWFPA are deeply aggrieved at the very challenging situation they now face for 2021… Whereas we have gained modest uplifts in shares for some stocks the stark reality is that the demersal sector enter 2021 facing significant shortfalls across a range of key species, which is down to the fact that we can no longer enter into direct swaps with colleagues in Europe.”
Mike Park - Chief Executive of the Scottish White Fish Producers Association

Another Brexit defeat for May