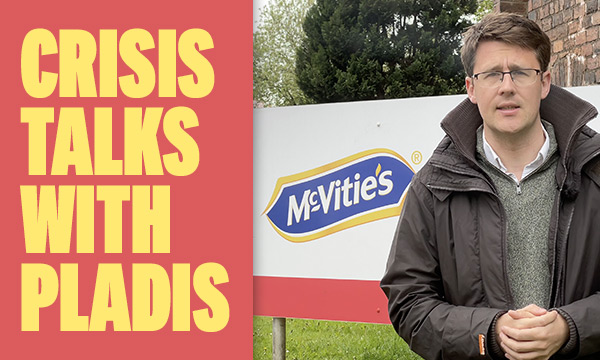 Earlier today, I met with McVitie’s to put pressure on the company to halt the proposed closure of the Tollcross factory.

In a video conference with David Murray, the Managing Director of the McVitie’s brand’s parent company pladis UK & Ireland, I made clear my strong opposition to the proposal and that it would be a serious mistake for the company to turn its back on Scotland.

In a further letter following the meeting, I have called on the company executive to reflect on the proposal, which would mark it a seismic shift from a company which has had a continuous presence north of the border since 1839.

Throughout the coronavirus pandemic, the loyal Tollcross workforce continued their shifts at the factory as key workers whilst much of the rest of the UK safely worked from home; putting themselves at risk to help generate record-breaking profits for the company.

The decision to launch the consultation to close the factory is a kick in the teeth to these employees, many of whom have worked in the factory for decades. The campaign to save the factory and protect these local jobs has just begun.

Read my letter to Mr Murray below:

Thank you for taking the time to meet with me today to discuss the proposal which has been brought forward by pladis UK & Ireland to close the factory in Tollcross in my constituency.

Please allow me to begin by reiterating my congratulations on the continued success of your business, of which the factory in Tollcross plays a significant role. I am given to understand that pre-tax profits in 2019 were £63mn — £5mn higher than the previous year. Furthermore, I am hugely impressed at the success of the lines produced in Tollcross. According to trade press, sharing snacks such as your Nibbles products have seen volume growth up 11.7% in the past year. Your core lines dominate in terms of sales, with Chocolate Digestives eclipsing the rest and sales up over 20% year-on-year. Digestives, Rich Tea and Chocolate Hobnobs have seen similar strong growth.

Your Vice President of Customer, Scott Snell, is quoted recently as saying, "It won't shock anyone to learn that the pandemic had a meteoric impact on the way British people shop… Biscuits had an incredible year amid a tumultuous 2020." In your company’s Annual Biscuit Review of 2020, sales were reported to have grown 7.2% in value terms, increasing by £212mn to £2.96bn, with the £3bn milestone expected to be broken this year.

Throughout the coronavirus pandemic, your loyal Tollcross workforce continued their shifts at the factory as key workers whilst much of the rest of the UK safely worked from home. They put themselves at risk to do so. Your company would not have had such a record-breaking year had they not.

I’m sure you are very proud of your company’s successes. I know personally, through speaking with staff members employed at your Tollcross factory, that they share this pride. Many of them have worked at the factory for a long time, often decades. Many of your employees have a family history of working at the factory and in some cases, several generations of the same family working at the factory simultaneously. For them, the success of the business is and always has been an enormous source of pride. The factory is very much interwoven with their personal history and sense of purpose.

The proposal came as a total shock to your workforce. This success, these record sales, and their loyalty through the largest public health emergency in living memory afforded them a sense of job security. Additionally, the investment made at the site to produce the Nibbles range gave the impression to all of us that Tollcross had a significant role to play in the company’s future.

As discussed on the call today, I have concerns regarding the public investment made to secure Nibbles production in Scotland. Around £895,085 of grant funding which was approved by Scottish Enterprise was accessed by pladis. £193,000 in taxpayer support was spent to develop the Nibbles product and bring production to Scotland from Turkey. You voiced to me that you believe commitments surrounding this funding have been met, however I believe it would help in relations with staff and trade union representatives if you were to provide greater clarity on this.

Following our call, I am also not entirely convinced that the proposal to close Tollcross was reached following a thorough examination of alternatives. In your letter to me last week, you advised that this had been one of a number of options. It appears to myself and many of those who work at the factory that it was the only option and that the process is being approached with the false premise that the factory does not have a viable future. Again, it would show good faith if greater transparency could be given about the process of determination undertaken to arrive at this proposal.

I know it came as no surprise to you that I consider the proposal to be wrongheaded. The withdrawal of your company from the East end of Glasgow would have devastating consequences for your employees and the local economy. From our conversation today, I appreciate that you understand the gravity of what has been put on the table yet am at a loss to understand how you can press ahead regardless.

Nonetheless, I welcome your commitment to work constructively with the Scottish Government and Glasgow City Council in parallel with the consultation process. I hope that this approach will be fruitful and convince you of the need to retain your presence in Glasgow East.

I hope that you will now take time to reflect. On paper, this proposal may appear to make sense. In reality, it represents a seismic shift in direction from a business with a history of growth and success. From humble beginnings in Edinburgh, McVitie’s has been synonymous with Scotland since 1839. To withdraw completely from our country, as is being put forward, would signify a fundamentally different way of doing business by a brand which is held in high regard by the public.

Comment on the rejection of McVitie's Action Group counter-proposal