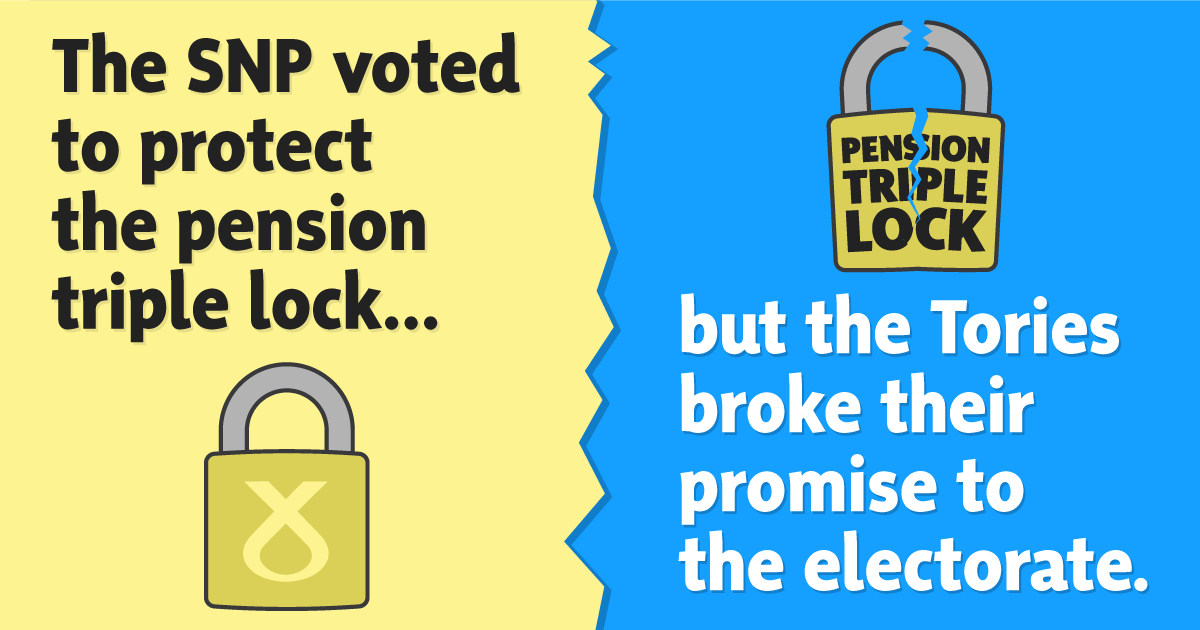 Last night, the Tories betrayed pensioners and broke yet another one of their manifesto commitments by scrapping the triple lock on pensions this year.

The triple lock is a guarantee that State Pensions would rise every year by whichever was the larger amount from:

The Tories have effectively made this guarantee meaningless by removing the commitment to raise pensions by average earnings growth for the year ahead.

The data also shows that pensioners in independent countries of Scotland's size or smaller receive a much higher proportion of the average working wage (64%) than UK pensioners (28%) and more than the average of countries in north west Europe (62%).

I spoke at length in the debate, calling for the triple lock to be protected - something all parties committed to in their manifestos - and outlining why this betrayal yet again underlines why Scotland must retire from the union and become an independent country.

The Tory government has already cut pension credit leaving households up to £7000 a year worse off, increased the state pension age for women born in the 1950s without notice, leaving them unable to plan and facing financial difficulties, broken their manifesto commitment to protect free tv licenses for over 75s, and frozen British state pensions overseas.

A decade of Tory austerity cuts, coupled with one of the worst state pensions in the developed world, means that millions of our older people are already living in poverty. Scrapping the triple lock is another hammer blow for pensioners from the UK government.

With each day that passes it's becoming clearer that the Tory government has absolutely no intention of looking to protect our older people and secure a real recovery from the pandemic.

The data shows that pensioners in independent countries of Scotland's size or smaller receive a much higher proportion of the average working wage. Independence is the only way to keep Scotland safe from Tory cuts. We need the full powers of independence to protect and boost the incomes of pensioners and secure a strong recovery.

🔒 The triple lock was a Tory manifesto promise

✅ @theSNP just voted to protect it

❌ The Tories broke their promise

Westminster isn’t working for pensioners. It’s time for Scotland to retire from this union. 🏴󠁧󠁢󠁳󠁣󠁴󠁿 pic.twitter.com/zdYuEbG61O