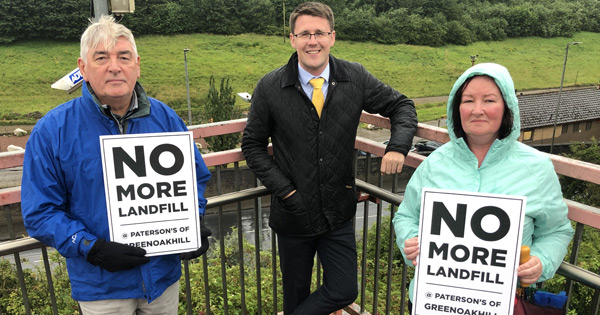 Recently, I pledged my support to local residents in Broomhouse and Mount Vernon who were making their voices heard in respect of proposals to extend landfill usage by Patersons of Greenoakhill.

The plans have moved from the pre-application phase and there is now an active planning application live at Glasgow City Council. Objections and comments can be submitting to planning authorities until Wednesday 18 November 2020.

It is abundantly clear that there is no local support for the proposals and as such, I have submitted an objection to the plans.

Read my letter to Planning & Building Standards below:

I write to object to the proposed planning application by Patersons of Greenoakhill (DRS Ref: 20/02460/FUL).

I am given to understand that Patersons were originally granted a landfill license in 1955, with the tipping of clean excavation and demolition material commencing the following year in 1956. It is also my understanding that the site was initially due to be closed permanently in 2017, however, a previous application to extend the life of the site was granted prior to this closure.

When this site initially opened, it was in a rural area surrounded predominantly by fields, however, this is no longer the case, as over the last 20 years several hundred houses have been built in the nearby Broomhouse and Baillieston areas. Residents have raised health and wellbeing concerns over a number of years regarding noxious odours and dust particles with elected representatives at all levels, as well as the Scottish Environmental Protection Agency (SEPA).

In addition to these concerns, other issues raised include the environmental impact of increasing the height of the landfill site itself by 16 metres, not only obstructing resident’s views further, but also continuing an increase in litter during high winds which would have an impact on local residents, those passing through and wildlife.

Further concerns regarding the proposed extension of the site include a company history of breaching landfill license conditions as well as failing pollution checks dating back at least 19 years to 2001 when a "Frontline Scotland" documentary exposed significant failings. In 2009 SEPA indicated that for two consecutive years Paterson’s of Greenoakhill Landfill had failed pollution tests for "repeated non-compliance with permit conditions".

It is my understanding that in 2015 Patersons of Greenoakhill were issued an enforcement order for a total of 26 breaches of their landfill license issued by SEPA. I am also aware that incidents are still ongoing, including one which I had raised on behalf of constituents with SEPA in March 2020 and was subsequently advised that SEPA had investigated and "identified a source of landfill gas which is not being captured through the landfill gas management system", with further infrastructural upgrades deemed necessary.

Additionally, I am aware that this landfill site between 2016 and 2018 consistently received SEPA’s second lowest rank in terms of pollution compliance, being described as "poor" both before and after the previous extension was granted. This application seeks a further extension to the lifetime of this site permitting its pollution inside the city limits of Glasgow to continue for eight years beyond the point at which it was due to be closed.

Glasgow City Council has placed significant focus in recent years on moving toward becoming a greener, more environmentally friendly city through the introduction of policies designed to expand recycling and reduce landfill waste. A recent policy which highlights this is the change in citywide bin collections.

I am also aware through regular communication with Glasgow City Council representatives and staff that their email suffixes state that Glasgow is "proud host of the 26th UN Climate Change Conference (COP26) - UK2021". I believe that bringing an end to the life of this facility will send a clear message that Glasgow is leading the way on combatting climate change.

In light of the increased number of residents in the nearby area (many of whom have raised objections to the expansion), the health concerns, the litter affecting the environment and local wildlife, the multiple breaches of landfill license, the high levels of pollution, and the Council’s stance in relation to a greener future I believe that this application should be refused.