Today I stood in solidarity with members of UNITE union as part of their orange Outrage campaign. COVID-19 has taken a serious toll on the aviation industry, and now the people paying for it are the workers, whose jobs are being put at risk and who are being subject to scandalous ‘fire and rehire’ tactics.

The workers demonstrating today included those from EasyJet and Dnata Catering UK, the UK’s leading inflight caterers. As of 31st August, EasyJet has closed its bases in Newcastle, Southend and Stansted airports, meaning the loss of over 600 cabin crew jobs. In total EasyJet is making around 1200 cabin crew employees redundant, a quarter of its entire cabin crew workforce. Additionally, employees at Dnata Catering UK are currently facing a ‘fire and rehire’ situation, whereby their pay will be cut, and they will be employed on contracts of just 20 hours a week. These distressing tactics will bring unnecessary hardship to workers, putting their livelihoods at risk. 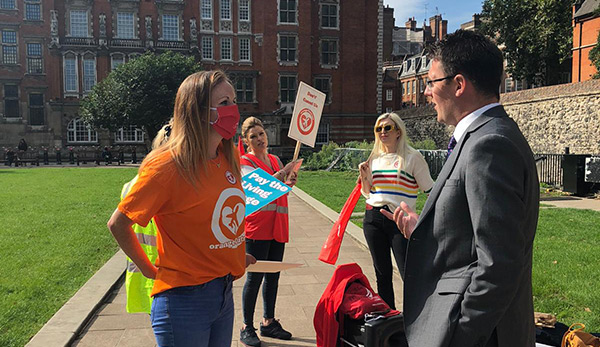 Unite has warned that the Governments refusal to support the aviation sector, has given employers like Easyjet the ‘green light’ to attack jobs and employment security.

In Parliament I have been challenging the Government on the treatment of Aviation workers. I have supported and sponsored Gavin Newlands MP's private member’s bill concerning prohibiting the dismissing and re-employing of employees, with the diminished conditions of their employment. As well, I have already written to the Prime Minister concerning similar ‘fire and rehire’ tactics used by British Airways, and I will be continuing to press the Government on this issue.