Reporting back from Washington DC 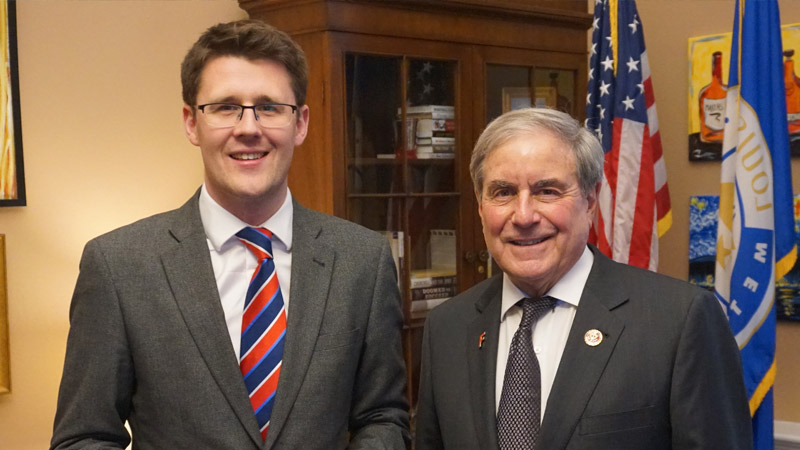 With Congressman Yarmuth to tariffs on beverage alcohol products.

Earlier this month I had the opportunity to make a brief trip to Washington DC to attend the US National Prayer Breakfast and meet with Senate and Congressional colleagues on Capitol Hill.

The US National Prayer Breakfast has been running for some 68 years now and brings together attendees from well over 100 countries from a range of backgrounds in charity, politics and business. I was delighted to be invited to attend and be able to speak with attendees about a number of issues pertinent to Scotland.

My particular thanks goes to Dr Russell Rook from the Good Faith Partnership for facilitating the visit, which was incredibly thought provoking - as was the keynote address at the National Prayer Breakfast from Arthur Brooks. His speech, which addresses political polarisation, can be found here.

Whilst in DC, I was also grateful for the opportunity to meet with the Prime Minister’s Special Envoy for FoRB (Freedom of Religion or Belief) and discuss the implementation of the recent Truro review into persecuted Christians. I took the opportunity at this meeting to once again press my concerns about the situation in India which has become intolerable for a number of different faith communities - including our Muslim brothers and sisters.

But my time in DC wasn’t just focusing on the persecuted Church. I was also on a mission to raise the deeply damaging tariffs placed on Scotch whisky by the USA, which is hurting the jewel in the crown of Scotland’s food and drink sector.

Since being elected in 2017, I’ve been a proud and active member of the All Party Parliamentary Group on Scotch whisky, ably led by my friend and colleague Brendan O’Hara MP. Before I left for the States, our APPG heard testimony from small distillers as well as colleagues in the Scotch Whisky Association. Put simply, it’s clear that the 25% tariffs imposed on whisky last October are already having an impact on the sector.

When many of us think of the whisky industry, we perhaps immediately think of Speyside or Islay but it’s so much more than that. Even in my own tiny constituency of Glasgow East, whisky is a significant part of our economy and provides good jobs. In the East End alone, we have three cooperages, one maturation warehouse and a bottling hall so I’ll always be a proud champion for Scotch.

Whilst I was in DC I was grateful for the opportunity to meet with members of the House Bourbon caucus. My thanks go to Congresssmen Andy Barr (Republican - Kentucky) and John Yarmuth (Democrat - Kentucky) for good discussions about how we can work across the Atlantic to end the tariffs on Scotch and Bourbon, which provide jobs in our respective economies.

Finally, as you can imagine, there was huge interest in post-Brexit Britain as well as the fall out for Scotland and the wider UK constitutional arrangements. Make no mistake, there’s a lot of goodwill for Scotland in the USA and I’m glad to have been able to build on that during my few days in DC.