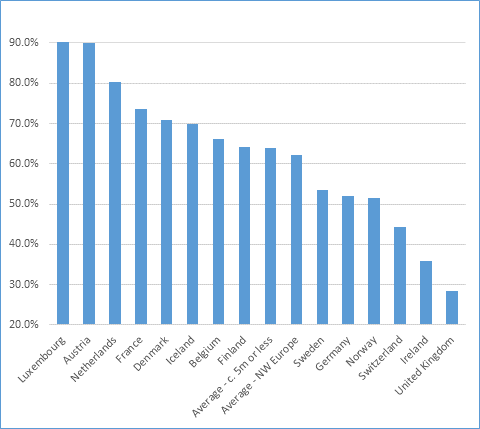 The SNP has said "Scotland needs the full powers of independence to protect and boost the incomes of pensioners" - as new research shows UK pensions are the least generous of every country in North West Europe in comparison to the average wage.

The figures also show that pensioners in independent countries of Scotland's size or smaller receive a much higher proportion of the average working wage (64%) than UK pensioners (28%) and more than the average of countries in north west Europe (62%).

The findings follow the publication of the UK government's Households Below Average Income (HBAI) statistics in March, which revealed UK pensioner poverty levels have risen to a 15 year high - with 2.1million UK pensioners (18%) now living in poverty after housing costs, an increase of 200,000 on 2018/19.

"After a decade of Tory austerity cuts, millions of older people are now living in poverty and the UK has one of the worst state pensions in the developed world.

"Independence is the only way to keep Scotland safe from Tory cuts, and Scotland needs the full powers of independence to protect and boost the incomes of pensioners.

"Boris Johnson should be ashamed that UK pensioner poverty has risen to a 15 year high on his watch but instead he's cut Pension Credit, axed the free TV licence, and is slashing Universal Credit for millions of families across the UK.

"Scotland is increasingly vulnerable under Westminster control. It is essential that people in Scotland have a choice over our future so we can build a strong, fair and equal recovery and more prosperous society as an independent country."