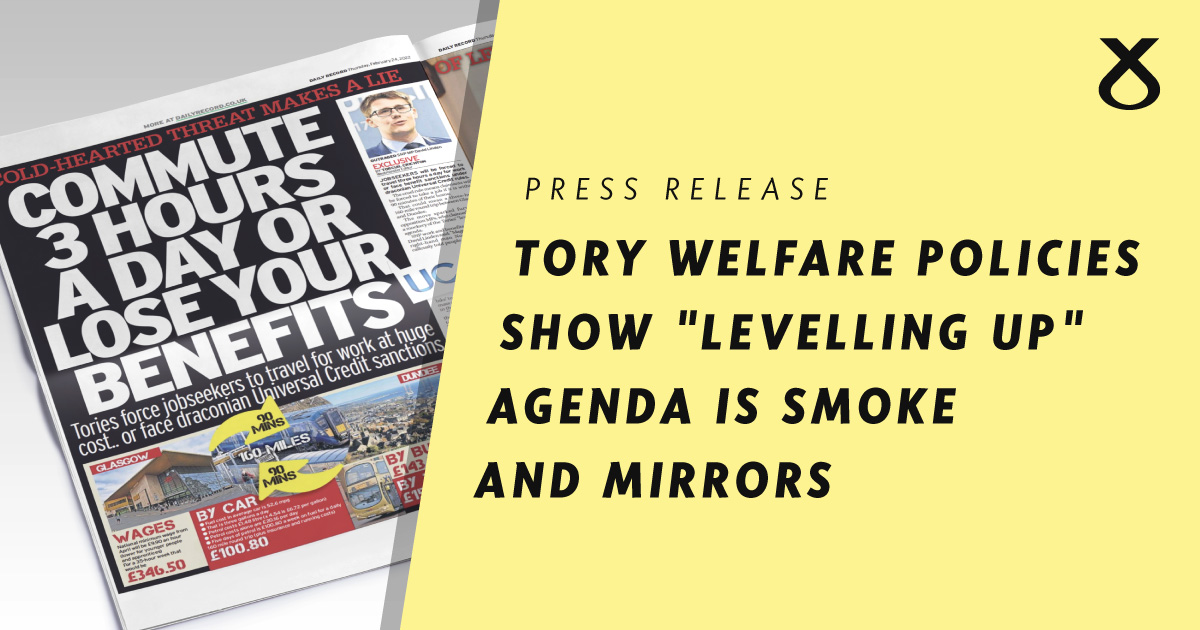 The SNP has slammed the Tories' so-called 'Levelling Up' agenda as "smoke and mirrors" after the Department for Work and Pensions (DWP) confirmed jobseekers are expected to commute up to 3 hours per shift or face being sanctioned.

In a response to a written question by SNP Work and Pensions spokesperson, David Linden MP, the DWP said that in the new Way to Work scheme a claimant is expected to take a job within four weeks - reduced from 3 months - even if it was a 90 minute commute each way to work, or be sanctioned.

Claimants are also expected to take a job even if it has nothing to do with their skills, experience, training, or demands unsuitable hours.

The new policy directly contradicts the 'Levelling Up' White Paper, in which Michael Gove states that "people deserve to live in a country where life is not a postcode lottery, where by staying local you can go far."

The SNP has said the new UK government scheme, which aims to move half a million people into work by the end of June, is just "painting over the cracks" if the Westminster government won’t also bring in a Real Living Wage, improve Statutory Sick Pay, and scrap poverty inducing policies such as sanctions, the two-child cap and associated rape clause, and the benefit cap.

"Norman Tebbit callously told people to ‘get on their bike’ to look for work when there was mass unemployment under the Tories in the 1980s. This ridiculous rule is taking up the Tebbit mantra and forcing people to go miles further or face having their benefits cut.

"It is ridiculous that the Tory government expects people to take a job that requires travelling the equivalent of Glasgow to Dundee, or Birmingham to London, each way or be sanctioned. It flies in the face of their ‘Levelling Up’ rhetoric and shows just how out-of-touch they are with real life and ordinary families.

"I expect the likes of Michael Gove and other UK ministers have no idea how much it would cost to travel the equivalent of 90 minutes to a job each way, potentially at peak times and five days a week - or the increase that could make to childcare costs.

"The Tories' whole so-called ‘Levelling Up’ agenda is quite frankly smoke and mirrors and the new Way to Work scheme is plain callous and won’t make a blind but of difference to in-work poverty until the Westminster government does the right thing and brings in a Real Living Wage, improves sick pay and scraps poverty inducing policies like sanctions.

"For all the Tories' rhetoric, work isn't paying under their watch, with in-work poverty out of control. It is clear that the only way we will be able to properly tackle in-work poverty, and poverty in general, in Scotland is through independence and the powers that will bring with it."

From questions-statements.parliament.uk
Parliamentary Written Question which confirms the travel requirement is not being dropped following the publication of the UK Government's Levelling Up white paper

From dailyrecord.co.uk
Daily Record article on this story