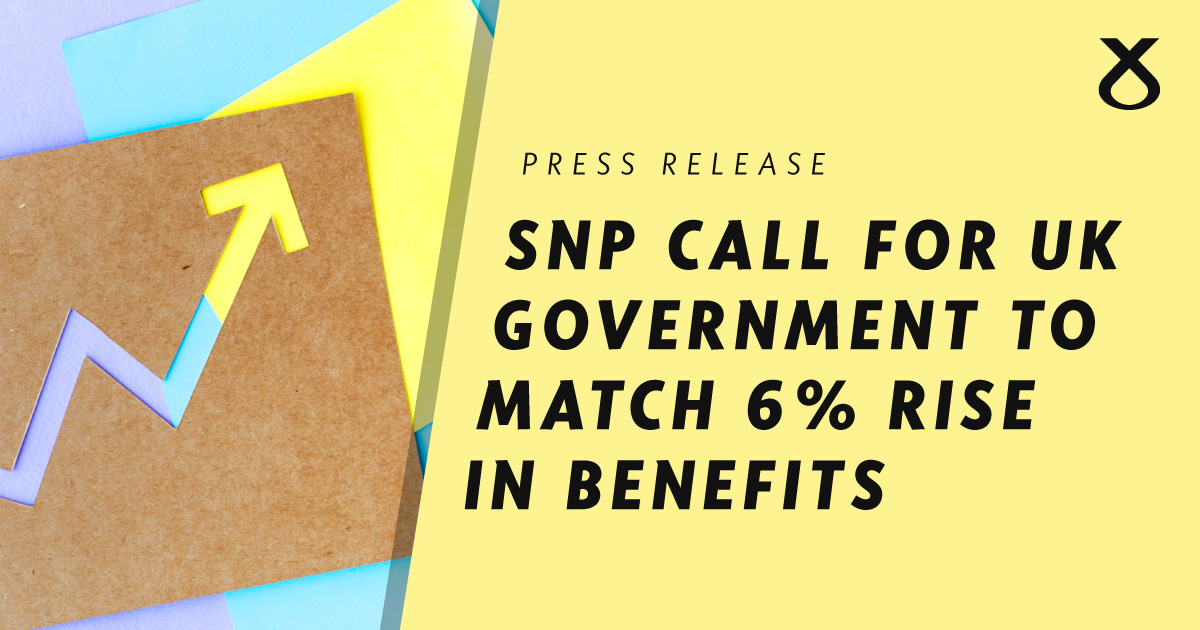 The SNP has challenged Rishi Sunak to match the Scottish Government's 6% benefits uprating at next week's spring statement to tackle the growing Tory cost of living crisis.

The call follows a letter from Scottish Finance Secretary Kate Forbes to the UK Chancellor and comments from the SNP Westminster Leader Ian Blackford on the Sunday Show urging the Westminster government to follow Scotland's lead.

The SNP government announced last week that it will double the uprating of six Scottish social security benefits from 3.1% to 6% from 1st April. These include the Job Start Payment, Young Carer's Grant, three Best Start Grants, and Carer's Allowance Supplement. Child Winter Heating Assistance, which was previously set to rise by 5%, will now also rise by 6%.

Families in Scotland are also being supported through the Scottish Government's £41 million Winter Support Fund and £290 million package of measures, including £150 for all households in receipt of Council Tax Reduction and those in Council Tax bands A-D.

"The SNP government has led the UK in supporting families, tackling poverty and mitigating the Tory cost of living crisis. It is vital that the Chancellor urgently follows Scotland's lead.

"Under the Tories, the UK suffers the worst poverty and inequality in north west Europe and the highest in-work poverty this century. Rishi Sunak has become the poverty chancellor - pushing families further into hardship by imposing Tory cuts and regressive tax hikes.

"The Chancellor must stop making excuses and deliver an emergency package of support at the spring budget - raising benefits by at least 6%, scrapping the NI tax hike, matching the Scottish Child Payment UK-wide, reversing the £1040 Universal Credit cuts, introducing a Real Living Wage, and turning his 'heat now pay later' loan into a more generous grant.

"This Westminster crisis has been a decade in the making - with Tory cuts, Brexit, and a failure to invest in renewables costing the economy billions, stagnating wages, decimating social security, and leaving the UK completely exposed to rising energy costs.

"For every step the SNP government takes forward to tackle poverty - Westminster drags us back again. The SNP doubled the Scottish Child Payment to £20 a week but at the same time the UK government robbed families of £20 a week by slashing Universal Credit. It's shameful.

"It is increasingly clear that there will be no fair recovery under Westminster control. The only way to keep Scotland safe from Tory cuts is to become an independent country, with the full powers needed to build a fairer and more prosperous future."

From dailyrecord.co.uk
Benefits in Scotland to rise by 6 per cent next month in response to cost of living crisis