Press release: Religious freedoms must be protected during the pandemic 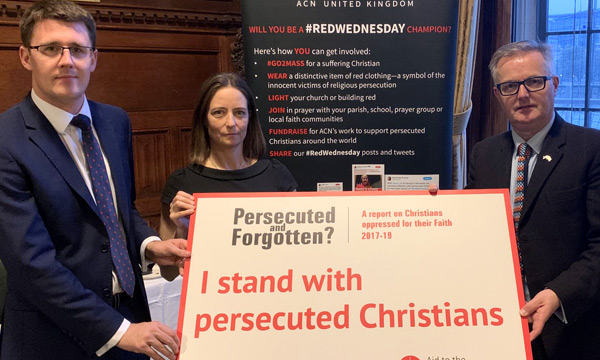 With colleagues Carol Monaghan MP and Brendan O'Hara MP at an Aid to the Church in Need parliamentary reception in 2019.

Glasgow East MP David Linden has called upon the UK Government to protect religious freedom during the COVID-19 pandemic.

During a Westminster Hall Debate the SNP MP highlighted the persecution that religious people have faced thus far during the pandemic.

The debate was called amid reports from Christian Solidarity Worldwide, Open Doors and Aid to the Church in need that religious minorities around the world have experienced severe injustices during the Coronavirus pandemic.

These organisations have noted that religious minorities have been denied social services, humanitarian relief and healthcare.

Christian Solidarity Worldwide has also specifically mentioned the poor conditions in refugee camps, which renders refugees particularly vulnerable to the virus. In some cases, those assisting them, some of whom are religious actors, are now also vulnerable.

In May, it was confirmed that COVID-19 had reached the Rohingya refugee camps on the Bangladesh-Burma border. The confirmation of at least two cases in the world’s largest refugee camp led aid organisations to warn of an impending humanitarian disaster.

Christian Solidarity Worldwide has reported visiting the Rohingya refugee camps twice and it is clear from first-hand observation that social distancing, self-isolation and even regular hand washing are an impossibility in camps where families live in cramped conditions.

Speaking from the House of Commons, David Linden MP said:

"COVID-19 restrictions and lockdowns have meant that around the world many persecuted Christians and religious minorities have been ignored when official aid and humanitarian relief is distributed.

"The pandemic has clearly exacerbated existing prejudices and injustices – with some Christians’ facing abuse and even violence.

"NGO’s and charities have stepped in and supported religious minorities, and I want to give credit to organisations like Christian Solidarity Worldwide, Open Doors and Aid to the Church in Need.

"One such example of practical support on the ground is that of Open Doors, whose Covid-19 relief package appeal is making a real difference in countries such as Nigeria and India.

"Every £56 donated equips a Rapid Response team to bring emergency food aid to a family of persecuted believers impacted by the pandemic.

"One thing is clear, religious freedom must be protected during the pandemic and the UK Government must be doing all in their power to protect religious minorities - this should include finally appointing the Special Envoy for Freedom of Religious Belief."