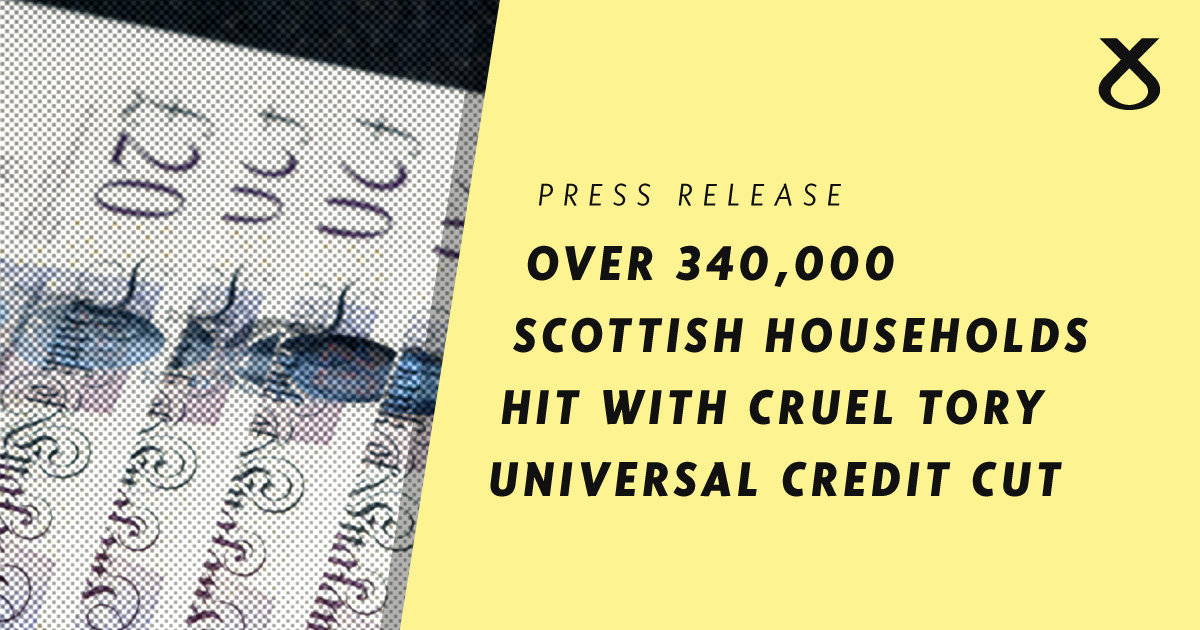 Over 344,000 households across Scotland have been directly impacted by the cut to Universal Credit implemented by Boris Johnson's government, according to new statistics.

Analysis from the House of Commons Library has revealed that, as of August 2021, 344,022 households across Scotland saw their incomes slashed by £1,040 per year – at the same time the country was gripped by a global pandemic and a Brexit-fuelled cost-of-living crisis.

Despite repeated warnings from every quarter of civil society about the disastrous consequences, Boris Johnson and Rishi Sunak ploughed ahead with their decision to end the lifeline uplift.

In contrast, the SNP Scottish Government this year introduced the game-changing Scottish Child Payment and has committed to doubling it to £20-per-week from April – a move that has been endorsed by a number of key stakeholders.

"This latest analysis from the House of Commons Library is damning, and highlights what the SNP warned would happen if the UK government slashed Universal Credit.

"As a result of Boris Johnson and Rishi Sunak's callous cut, over 340,000 households across Scotland will be facing a harsh and difficult 2022.

"In contrast, the SNP Scottish Government continues to help those on the lowest incomes with commitments to doubling the Scottish Child Payment and to introducing a new winter heating benefit to help around 400,000 low-income families across the country.

"Time and time again, we see a tale of two governments – one that invests and protects those on lower incomes, and one that leaves them out to dry.

"Only with the full powers of independence can Scotland rid itself of cruel Tory cuts and finally deliver a social security system with fairness and justice at its heart."

People affected by the removal of the UC uplift

All people in receipt of UC payments were awarded a £20 per week uplift to their standard allowance between April 2020 and September 2021, and all those receiving a payment were subject to its removal in October 2021. Data on the number of claimants in payment is only available for households (from the same sources as above), and the latest data available is for August 2021. These figures can be used as indicative figures for the number of people affected by the removal of the uplift – they will not match figures for October, but are the best available estimate. Again, these figures are provisional.

A full breakdown of the number of households receiving a UC payment in Scotland by Westminster constituency can be found here (Excel file download).