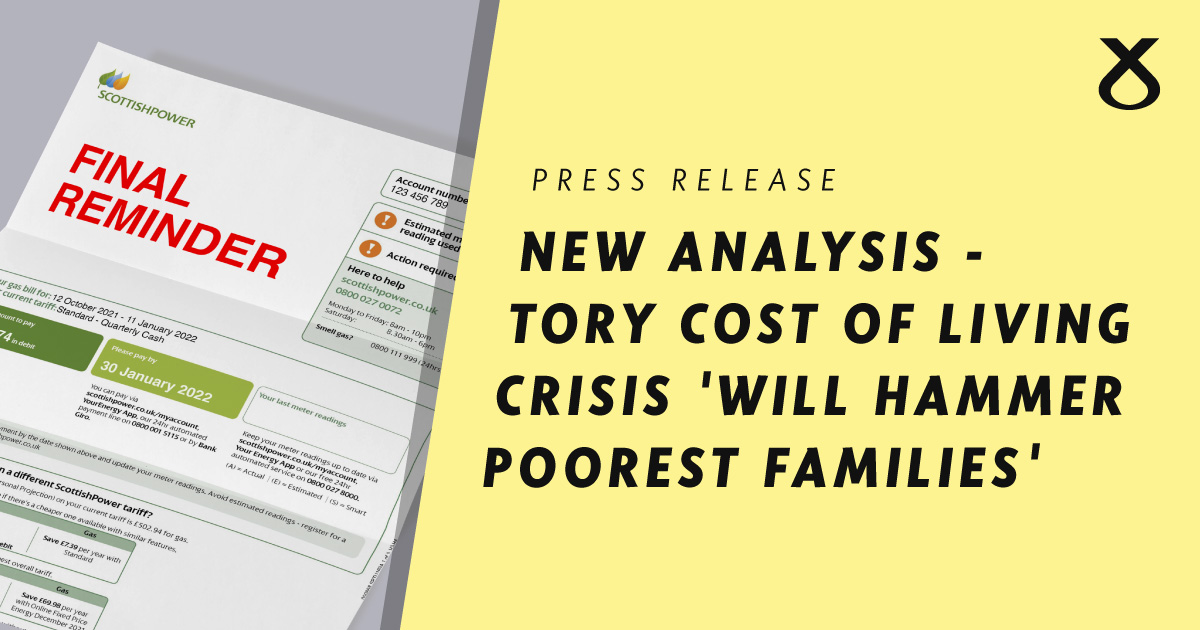 Low income households to spend 18% of income on energy bills

The SNP has said the UK government is "pushing families into poverty" by failing to tackle the growing Tory cost of living crisis - as new analysis shows the poorest households will be hammered hardest by soaring energy bills.

The report, which compares household spending on gas and electricity bills of low and middle income families between 2019/20 and 2022/23, also found that lone parents and couples without children will spend around a quarter of their income on energy bills - an increase of almost 10 percentage points.

"The UK government is pushing families into poverty by failing to tackle the Tory cost of living crisis, which will hammer millions of low and middle income households.

"While Tory ministers are focused on covering up Westminster sleaze scandals, and saving Boris Johnson's skin, they are failing to lift a finger to reverse the rising poverty and inequality they've caused, which has reached crisis point on their watch.

"Under Boris Johnson, the UK has the worst levels of poverty and inequality in north west Europe, and in-work poverty is at record levels this century. Now the problem is becoming even worse - with the majority of families expected to be hundreds or thousands of pounds worse off as a result of Tory failure - a devastating blow.

"The SNP government is tackling poverty by doubling the Scottish Child Payment and introducing new benefits - but Westminster austerity cuts are undoing progress and must be tackled at source.

"The UK government must reverse its cuts to Universal Credit, match the Scottish Child Payment UK-wide, deliver a low income energy payment, introduce a real living wage, raise sick pay, and scrap damaging Tory policies like the bedroom tax and two-child cap, which have plunged people into poverty and hardship across the UK.

"Given their appalling track record, it's highly unlikely Westminster will take the bold action required. The only way to truly keep Scotland safe from Tory cuts is to become an independent country, with the full powers needed to eradicate poverty and build a fairer society."