Press release: Households to lose £1,700 in 2022 under Tory cost of living crisis 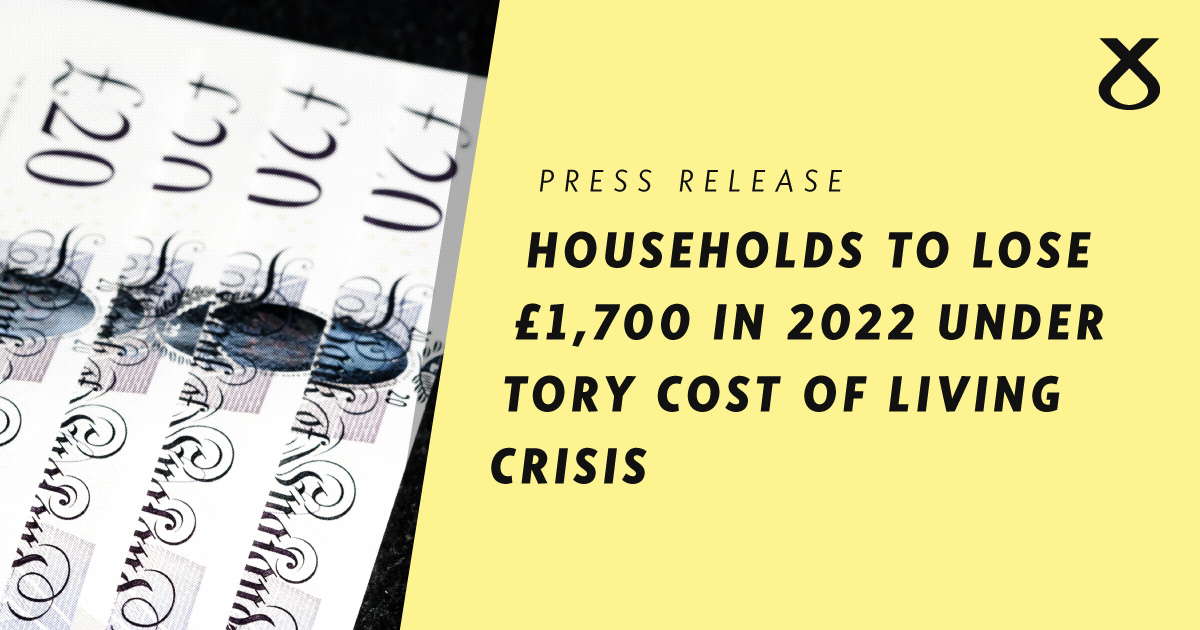 Only independence can protect Scottish incomes

The SNP has said only independence can protect Scottish incomes – as new analysis reveals the average UK family will lose £1,700 in 2022 as a result of Boris Johnson's Brexit-fuelled cost-of-living crisis.

Research conducted by the Centre for Economics and Business Research (CEBR) projected that the inflation rate would rise to 4.6% by Christmas – mainly due to the rise in energy and fuel prices.

The forecast is based on the price of commonly bought items - including food, clothes, and household goods - as well as utility bills including fuel, energy, and transport costs.

It comes at a time when the SNP Scottish Government launches a new heating benefit initiative that will help around 400,000 low-income families with the reassurance of a guaranteed £50 payment every winter.

Furthermore, the SNP Scottish Government has also committed to doubling the game-changing Scottish Child Payment to £20-per-week in order to tackle the cost-of-living crisis created by Westminster.

"The latest analysis from the CEBR highlights the extent of the cost-of-living crisis created by Boris Johnson’s government, including the rising costs of food and many everyday items which has been fuelled by their shambolic Brexit deal.

"With inflation rates set to rise to 4.6% by the end of the year, millions of households across the UK will see their bills soar drastically – all because we have a Tory government who refuse to tackle this crisis head on.

"Instead of stuffing the House of Lords with party donors, or increasing tax on the country's lowest earners, or removing the £20-a-week Universal Credit uplift, the Tories should be putting money into people’s pockets – not taking it out.

"In contrast, the SNP Scottish Government has today launched a new heating benefit which will help around 400,000 low-income families this winter, as well as doubling the Scottish Child Payment to £20-per-week.

"Yet again, we see a tale of two governments - one that invests and protects its people, and one that leaves them out to dry.

"There can be no doubt that only with the full powers of independence can Scottish incomes be protected from cruel Tory cuts.

"With independence, we can finally deliver an investment-led recovery from the pandemic, and rid ourselves of Tory rule once and for all."

From bbc.co.uk
UK inflation: Rising costs could push family spend up £1,700 a year