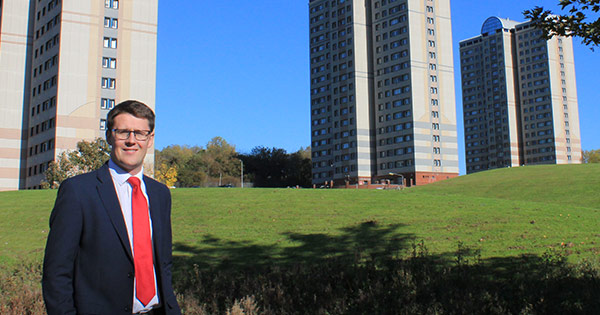 Glasgow East MP David Linden has called upon the Government to outline the potential consequences of the Internal Market Bill on building standards and regulations in Scotland.

In September the Internal Market Bill was introduced to the House of Commons, facing fierce opposition from the SNP.

The Bill, which aims to prevent any trade barriers between countries in the UK after the departure from the EU, is being called a “power grab” from Holyrood, while the First Minister of Wales has described it as a "smash and grab" on devolution.

The UK Government has said that the bill represents “the biggest transfer of powers since devolution.”

SNP MP’s have repeatedly highlighted how the Internal Market Bill will lead to a ‘race to the bottom’ of building standards, with the lowest common denominator becoming the norm.

Concerns over construction regulations have already arisen, with leading experts highlighting that Scotland currently imposes higher standards on construction projects than those in England and Wales. Many have raised concerns over the fact that in Scotland, construction regulations mean there is a ban of flammable cladding. This cladding has remained in use in England, and devastating led to the Grenfell Tower fire in 2017. Under the Internal Market Bill, the Scottish regulation against flammable cladding would be illegal.

Challenging the Government in the House of Commons today, Glasgow East MP David Linden said he would continue to oppose the “disastrous” Internal Market Bill and its consequences for Scottish construction.

Speaking from the House of Commons, David Linden MP said:

“In Glasgow East there are currently 10 tower blocks – so this issue is close to home for me and my constituents.

“In Scotland we have stricter rules and regulations compared to the rest of the UK on issues such as cladding and have different tenancy forms than England.

“In my role as SNP spokesperson for Housing, Communities and Local Government, I believe it is vital to stand up for Scottish construction industries and protect Scottish housing regulations.

“I will continue to question the Government on the potential consequences of the disastrous Internal Market Bill on Scottish building regulations, including cladding and fire safety.”