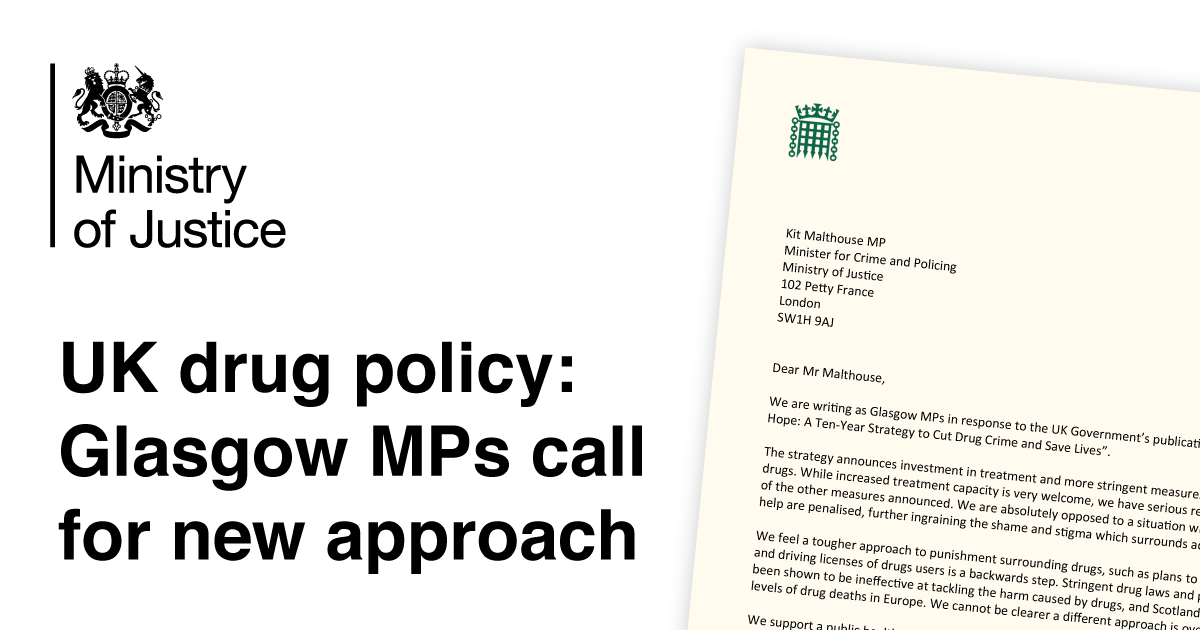 Every Glasgow MP has signed a letter to the Minister for Crime and Policing to warn that the UK Government's new drug policy is the wrong approach.

"From harm to hope: A 10-year drugs plan to cut crime and save lives" sets out the British Government's plans to tackle drug addiction and associated criminal activity.

We firmly support a public health approach to drug use in Scotland. By treating drug addiction as a health issue rather than a criminal matter, we believe that violent crime associated with narcotics will decrease. Indeed, evidence shows this to be the case.

Drug policy is still reserved to Westminster, with the Scottish Parliament unable to legislate on the misuse of drugs. It simply isn't acceptable for the Conservative Government in London to ignore Scotland's elected representatives and public health experts on this issue.

We need a different approach and this ideological war on drugs and drug users is only going to make matters worse. It is time for the UK Government to listen and to either create policy that is in the interests of all four nations, or to devolve the powers to Scotland so that we can properly tackle drugs and all of the problems that they cause in our communities.

Read our letter below:

We are writing as Glasgow MPs in response to the UK Government's publication of "From Harm to Hope: A Ten-Year Strategy to Cut Drug Crime and Save Lives".

The strategy announces investment in treatment and more stringent measures on those who use drugs. While increased treatment capacity is very welcome, we have serious reservations about some of the other measures announced. We are absolutely opposed to a situation where people who seek help are penalised, further ingraining the shame and stigma which surrounds addiction.

We feel a tougher approach to punishment surrounding drugs, such as plans to remove passports and driving licenses of drugs users is a backwards step. Stringent drug laws and punishments have been shown to be ineffective at tackling the harm caused by drugs, and Scotland now faces the worst levels of drug deaths in Europe. We cannot be clearer a different approach is overdue.

We support a public health approach to drug use in Scotland. This concept has been shown to work in other problem areas such as violent crime, with Glasgow's Violence Reduction Unit playing a big part in reducing violent crime across the city. The violence reduction strategy showed the importance of tackling crime in an empathetic way, working with offenders to give them a positive alternative: job opportunities and investment in a future outside of crime.

It is extremely worrying that the UK Government strategy proposes forcing people into medical treatment by threatening them with harsher punishment. This is an unethical approach and seems extremely unlikely to effectively reduce addiction rates. Harsh punishments surrounding drug use have been tried time and time again. We are concerned this government are pursuing a war on drugs that cannot be won with a strategy which has failed to work to date. Further penalising drug users is an idea which may appease some in the backbenches of the Conservative party, but it will not work in practice.

Above all, drug policy must strive to reduce harm to people who use drugs. The UK Government’s strategy still includes no plans for supervised injecting facilities. The UK is an international outlier by refusing to allow these life-saving initiatives. There have been plans for such a facility in Glasgow for five years, and this government have blocked it from going ahead on many occasions. It is difficult to estimate how many lives could have been saved in this time frame.

The reality of this choice is it leaves people in Glasgow injecting in parks, in filthy bin sheds, in closes and in doorways. It leaves drug users vulnerable to infections and stops them from being able to access the help that they need. It also leaves dangerous medical waste in places where children play and in people’s homes. Furthermore, it presents a danger to workers such as paramedics and local authority cleansing staff who often must deal with it. We call upon the UK Government to listen to experts and follow international examples such as Switzerland, Canada and many US States in allowing drug users to effectively seek the help they need without fear of further punishment or stigma.