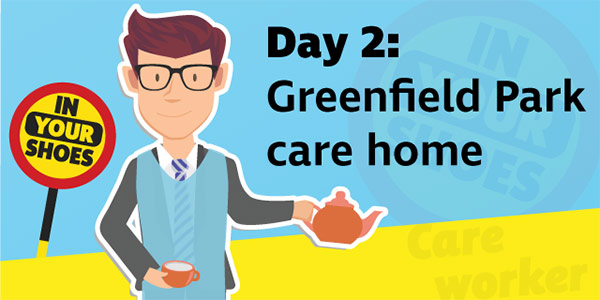 Walking through the doors of Greenfield Park care home is never easy.

At the beginning of 2015, my Gran suffered a subarachnoid haemorrhage which led to a rapid decline in her physical and mental health. After being discharged from hospital, she was transferred to Greenfield Park care home where she received palliative care before eventually passing away – just four days before our first child was born in June 2015.

Even before I was elected as the MP covering Greenfield Park care home, I had nothing but respect for the wonderful team there who made sure my Gran was comfortable and well cared for as she saw out her final days. Not only that, but they also supported us as a family whilst we watched her mind and body deteriorate – an incredibly difficult thing to watch.

One of the first public engagements I was invited to after my election in 2017 was an open day at Greenfield Park and I swithered about whether or not I could really bring myself to attend – because the last time I had been in the building I had watched my Gran breathe her last before finally passing away.

In the end, I decided to attend and I’ve built up a good relationship with the home, especially Robert, who runs Greenfield Park.

So, I was incredibly grateful to Robert and his team who took me under their wing today for my stint in the home.

I guess people all have their own preconceived ideas about what happens in a care home but it was good to see it from the point of view of a staff member today.

For the first couple of hours, I buddied up with Jo, the energetic and fun Activities Coordinator who knows all of the 100+ residents by name. Her job is to keep the residents engaged, entertained and active – something that’s vitally important, especially when so many of them have deteriorating physical and mental health.

Jo paired me up with Marie, an elderly lady who took me by the hand and spent a good while having a wee natter with me in the sensory room.

After a few visits to the various lounges to explain who I was and why I was there, it was off to the kitchen with Assistant Chef, Barry, who set me to work with his colleague, Kev. 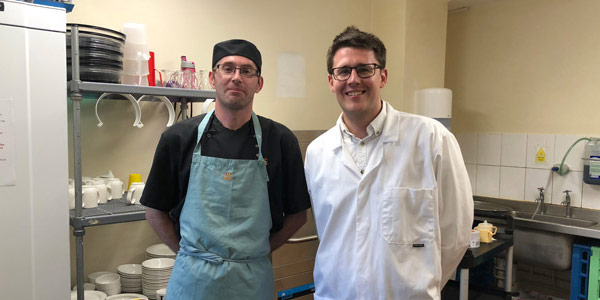 Working in the kitchen with Kev

Kev and I were serving up dinners for residents in Roselea and it was really amazing to see just how much care and focus goes into making sure the meals are suitable for everyone’s diet. Bear in mind that some residents no longer have the ability to swallow harder foods, so it’s imperative that there’s a decent range of food available.

Once dinner was finished, it was onto the cleaning up which involved lots of dishes and cleaning the floors. After that, we set-up the tables for breakfast tomorrow when Kev, Tony, Marie and Barry will do it all over again.

One of the things I’m struck by, particularly with the care staff, is that they’re often having the same conversation over and over again – particularly with residents who have dementia. The remarkable thing is, though, that despite being asked the same question again, the staff respond with kindness and patience – something not all of us would be able to do.

It’s hard not to conclude that it takes a special person to be a carer. You invest so much physical and emotional energy into providing invaluable care and support for someone, often only for them to pass away months later. That cannot be easy.

We know that many jobs which exist now will no longer exist in years to come due to automation. Robots will take over factory lines and people will inevitably be made redundant.

Equally, we know that we have an ageing population and dementia is on the rise, so the provision of care will be a greater demand in years to come. One of my major concerns is that we need to do more to ensure that care work is an attractive career – there’s no doubt that it’s fulfilling but the elephant in the room has always been the relatively low levels of pay in the sector as a whole, which needs to be addressed if we are to meet the challenges of an ageing population.