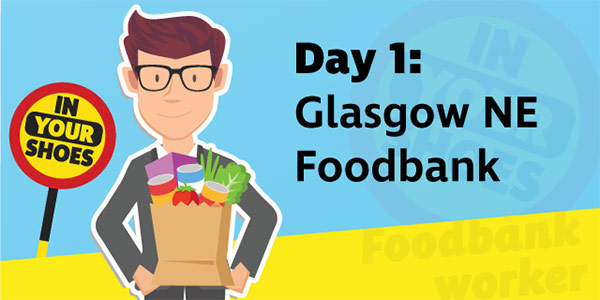 Firstly, a massive thank you has to go to Tara and all the volunteers at the foodbank who not only made me feel so welcome but really helped me understand a bit more about the practical work they do behind the scenes.

As a constituency MP, I meet people every day who have fallen upon hard times – whether that’s due to benefit cuts, low income or insecure work.

Politically, there’s a much wider story to be told about the increased demand for foodbanks and why they’ve become such a major part of our community. #InYourShoes isn’t about politics, though. It’s fundamentally about people and appreciating the contribution they make through their work.

By the time I arrived at the foodbank today, Tara and her team of volunteers were already hard at work, making up parcels of food and ensuring that their visitors for the day were comfortable and relaxed.

Walking into a foodbank for the first time conjures up a lot of emotions for people – and it’s absolutely understandable given the circumstances. However, that’s precisely why there’s always a warm, friendly, non-judgemental welcome from the moment you step into the Church.

For the first part of my time at the foodbank, Tara (never one to miss an opportunity!) hooked me up with a couple of constituents who had problems with housing and benefits. As well as offering them some practical advice, I took details of their case and I’ll be drafting up some letters to the DWP and relevant Housing Associations for them tonight.

After picking up some new casework, I moved into the store room to help one of the volunteers, Robert, with sorting out some donations of food they’d received from the local Tesco.

The generosity of local people never ceases to amaze me but all those cans and packets still need to be sorted and ready for picking and packing into food parcels.

As I was working away with Robert in the store room, I was struck by the sheer fact that here was a guy freely giving his time to people he would never meet and whose circumstances he’d never know – but still he ploughed on, heaving up the next heavy box of food to sort.

Working in a foodbank is a mix of emotions – desolation because people will often voluntarily tell you why they’ve hit crisis point, encouragement because you know that they won’t be going to bed hungry that night, anger because much of this could be avoided and even a little pride because you’re playing your small part to fight food poverty.

The guys who keep Glasgow NE foodbank running don’t take grinning selfies with tonnes of food and post them on social media saying "look, how wonderful am I". Instead, for three days a week, they simply don an apron and put in the sheer hard graft to make sure that their friends, their family and their neighbours don’t go to bed hungry that evening.

It’s generosity and community personified and we owe them all an enormous debt of gratitude.

Three things practical things you can do to support Glasgow NE foodbank: