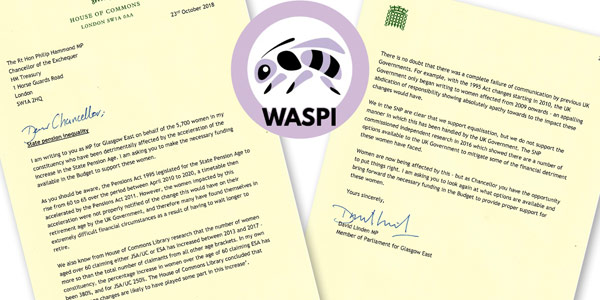 Writing to the Chancellor of the Exchequer, I have called on him to use his Budget to end the injustice for women facing pensions inequality once and for all.

The WASPI (Women Against State Pension Inequality) women are still adversely hit by the Tories' failure to address the injustice of the acceleration of the increase to the state pension age.

These women are guilty of nothing. They have had the misfortune of being female and being born in the 1950s and live under this UK government who refuses to do the right thing.

The UK government must take responsibility and do the right thing for these women who are missing out on their pension.

Full text of the letter

I am writing to you as MP for Glasgow East on behalf of the 5,700 women in my constituency who have been detrimentally affected by the acceleration of the increase in the State Pension Age. I am asking you to make the necessary funding available in the Budget to support these women.

As you should be aware, the Pensions Act 1995 legislated for the State Pension Age to rise from 60 to 65 over the period between April 2010 to 2020, a timetable then accelerated by the Pensions Act 2011. However, the women impacted by this acceleration were not properly notified of the change this would have on their retirement age by the UK Government, and therefore many have found themselves in extremely difficult financial circumstances as a result of having to wait longer to retire.

We also know from House of Commons Library research that the number of women aged over 60 claiming either JSA/UC or ESA has increased between 2013 and 2017 – more so than the total number of claimants from all other age brackets. In my own constituency, the percentage increase in women over the age of 60 claiming ESA has been 380%, and for JSA/UC 250%. The House of Commons Library concluded that 'pension age changes are likely to have played some part in this increase'.

There is no doubt that there was a complete failure of communication by previous UK Governments. For example, with the 1995 Act changes starting in 2010, the UK Government only began writing to women affected from 2009 onwards – an appalling abdication of responsibility showing absolutely apathy towards to the impact these changes would have.

We in the SNP are clear that we support equalisation, but we do not support the manner in which this has been handled by the UK Government. The SNP commissioned independent research in 2016 which showed there are a number of options available to the UK Government to mitigate some of the financial detriment these women have faced.

Women are now being affected by this – but as Chancellor you have the opportunity to put things right. I am asking you to look again at what options are available and bring forward the necessary funding in the Budget to provide proper support for these women.